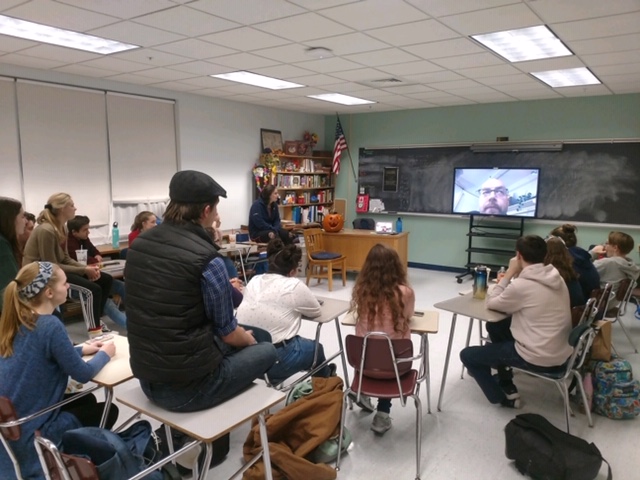 On Friday, October 26th, as the production of Chicago: High School Edition was getting closer to bursting onto the stage at the Messalonskee Performing Arts Center, the student actors in the cast were able to Skype with Broadway actor Alexander Gemignani.

Alexander Gemignani is a Tony Award-nominated actor based in New York City. He is known for his roles on Broadway such as Mr. Enoch Snow in Carousel (which earned him the nomination for Best Featured Actor), Jean Valjean in Les Miserables, King George III in the Chicago production of Hamilton, and Mr. Billy Flynn in Chicago‘s long-running revival. Mr. Gemignani is also a brilliant musical director, writer, and conductor. When the students sat down with him over Skype, he was calling from backstage of the Broadway production of Mean Girls where he was subbing in as the conductor that evening.

The conversation was orchestrated and moderated by myself, Austin Hayes, the new director of the Messalonskee Players. I met Mr. Gemignani when I was a student at The National Theater Institute. I later had the privilege of working alongside him at The Eugene O’Neill Theater Center in Waterford, Connecticut when he took over as Artistic Director of The National Musical Theater Conference. When I mentioned that I would be moving back home to Maine after my contract as Master Electrician ended and that I would be directing Chicago: High School Edition, he leapt at the chance to speak with the students.

We had Mr. Gemignani for just shy of forty-five minutes, during which he talked about growing up in theater, moving to New York, life as an actor, and what working on Broadway is really like. “It’s a bit different when you’re Enoch Snow than when you’re Valjean,” he told them. “Not that you’re less committed, but being on stage for 14 minutes is a lot less taxing than three hours straight of singing and dancing.” He also took questions from students, including: “What was your favorite show you’ve ever worked on?” (“It’s cliché,” he laughed, “but whichever one I’m currently on.”) and “What’s your advice to a young actor?” (“Get out there and work. You’ll work four temp jobs to sustain doing your friend’s production of All My Sons, but it’ll be amazing.”)

All of that, of course, alongside chatting about his time working on Chicago. “I went in to audition for Amos,” he told the group, laughing. “I was prepared and read well for it!” At the end of his audition, they asked him if he knew the Billy Flynn material and if he would try it out. He went on to play Billy for over three months. “It’s easy if you have a great Roxie and a great Amos,” he told the group. “And the script is so good – the dialogue is just as musical as the songs are!”

With that, he signed off and went on to conduct a Broadway performance and the students went home, ready to come in and dive deeper into the material during the following afternoon’s rehearsal.

Chicago: High School Edition goes up at the Messalonskee Performing Arts Center on November 15- 17 @ 7pm and November 18th @ 2pm. Hope to see you there!